The Hairdresser of Harare by TENDAI HUCHU has been praised by Brian Chikwava, award-winning author of Harare North, as ‘a subtle and refreshing story of life in contemporary Harare … a novel of morality, prejudice and ambition told with humour and tragedy.’

Tendai’s novel is a delicious fare of delight, well-paced yet garnished with suitable humour. 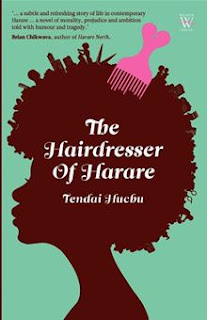 I KNEW THERE was something not quite right about Dumi the very first time I ever laid eyes on him. The problem was, I just couldn’t tell what it was. Thank God for that.

There was a time that I was reputed to be the best hairdresser in Harare, which meant the best in the whole country. Amai Ndoro was the fussiest customer to ever grace a salon and she would not let any ordinary kiya-kiya touch her hair. Having sampled all the salons in Harare – and rejected them all – she settled on ours. The fussiest cus- tomer was also the largest motor mouth and gossip-monger. Once she was our client, we never needed to advertise again, as long as we kept her happy. That was my job and why Mrs Khumalo paid me the highest wage.

Khumalo Hair and Beauty Treatment Salon was in the Avenues, a short walking distance from the city centre. We did hair but never any beauty treatments. In any case I doubt any of us knew how to. There was a rusty metal sign painted white with black lettering on the front gate that pointed to our establishment. The rust, accumulated over several rainy seasons, had eaten away so much of the sign that only Khumalo's drawing of a lady with a huge afro and an arrow still showed. Our customers didn’t need it, the directions were simple.

‘Go up from Harare Gardens, skip two roads, take a left, skip another road and look for the blue house on your right, not the green one, and you’re there.’ You’d have to be a nincompoop to miss it.

The front section of the house, which once served as a lounge, was converted into an internet café with a dozen or so computers. You could hear the fans humming and the shriek of the dialler from the pavement across the road. Their prices weren’t too bad either, com- pared to those at Eastgate or Ximex Mall. The rest of the main house was used by the Khumalo family, all thirteen of them.

Our salon was at the back in what used to be the boy’s kaya, ser- vant’s quarters. From across the yard, the fragrant aroma of relaxers, dyes, shampoos and a dozen other chemicals hit you. The smell merged with the dust from the driveway and left something in your nostrils that you couldn’t shake off until the next time you caught a cold.

The building had been crudely extended. A wall had been knocked down to the left and concrete blocks hastily laid to add another seven metres. Such architectural genius had left us with a hybrid building, the likes of which you could only find if you looked hard. The right of the building was constructed of proper burnt bricks, profession- ally built in every respect. You could see the dividing line where the cheap concrete blocks had been used. Aesthetics aside, we were all grateful for the accommodation though it rattled a little during heavy storms.

Each morning I was greeted by Agnes with, “Sisi Vimbai, you’re late again. Customers are waiting.” Mrs Khumalo’s eldest daughter held the keys and opened shop.

I would make a sound like ‘Nxii’ with my lips and walk in without greeting the cow. I hated her, she hated me twice as much and so long as mummy wasn’t in, there was no need to pretend otherwise. Everyone knew I was the goose that laid the golden eggs. If I left, half the customers would follow me. In any case letting them wait made them realise how lucky they were to be served at all, so I was actually doing the business a favour.

There were three other hairdressers, Memory, Patricia and Yolanda plus Charlie Boy, our barber, who always came in smelling of Chibuku. The salon was my personal fiefdom and I was queen bee. I would throw my handbag on the floor underneath the cashier’s desk and boil myself a cup of tea.

“There is a new style I want you to do for me.” How often have I heard these words, usually followed by a folded picture torn from some glossy American magazine.
“Nxii, I can do that easily, it’s just the style for you!” I always indulged them with a white lie.

There’s only one secret to being a successful hairdresser and I’ve never withheld it from anyone. ‘Your client should leave the salon feeling like a white woman.’ Not Coloured, not Indian, not Chinese. I have told this to everyone who’s ever asked me and what they all want to know is how d’ you make someone feel like a white woman. Sigh, yawn, scratch.

The answer is simple, ‘whiteness is a state of mind’.

Mrs Khumalo understands this and that’s why she would never fire me. The other girls don’t understand it and that’s why Patricia was fired. The stupid girl got pregnant less than six months into the job, so, of course, Mrs K. had no choice. Hairdressers are there to sell an image and that image is not pushing a football in your belly. Suddenly we had a vacancy. Little did I know that this small twist of fate would cost me my crown.


The Hairdresser of Harare is published by Weaver Press, and is available in bookshops in Zimbabwe, South Africa and other African countries, and of course on Amazon.