Snatches from a Memory

We are four writers sitting at the table spooning rice into our plates when a fellow writer – a Norwegian blonde – pulls up a chair. She exchanges pleasantries with the other writers, then sits beside me.

Just seeing her for the first time, I introduce myself.

She tilts her head back, fixing me with a stare. I fancy a smile turning up on her lips, but she says in a serious tone, ‘You are from Nigeria?’

I nod, noting a genuinely surprised look in her eye.

‘Lots of demons and Holy Spirit,’ she says.

I manage a quick smile, though annoyed with Nollywood and its penchant for spiritualising every Nigerian flick. 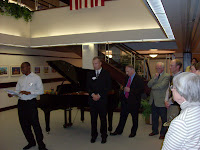 I am sipping merlot at a civic dinner at MUSON Centre when a greasy-haired American comes up to me, few minutes after I’d just finished reading a poem on the Niger Delta.

‘That’s quite touching, very political,’ he says, nodding his head.

I smile appreciatively. ‘I am inclined to the political,’ I tell him.

‘It’s hard to accept the extent of election rigging that returned Obasanjo a second term.’

Not everybody can be like Mandela, I almost tell him. But I offer him a smile of understanding instead.

He glances around. ‘It’s a great shame that Nigeria is in this mess,’ he mentions.

‘These things happen…’ I reply carelessly. Then I notice the American is about grinning and I chip in, ‘…I suppose the Florida experience, which returned George W. Bush Jr., still remains fresh in the minds of many a Nigerian politician.’

And the grin peters out of his face, replaced by a downy red. 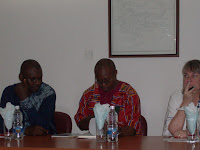 Laure and I are chatting at an award dinner party when our host calls me aside.

‘There’s someone you should meet –’ Kraft Penbottom says, his arm cutting a breezy arc over his face. ‘Hey, Kylie, I’d like you to meet …’ Then he slips away to catch up with another writer.

I smile, reaching for Kylie’s hand. She is a sprightly-looking playwright. Her cheeks remind me of sunflowers.

‘So you are from Nigeria?’ she asks, her green eyes twinkling.

‘Yeah,’ I reply, not quite eager to slide back to Laure’s side.

Kylie lets out a soft-bellied laugh. ‘How did you get the grant?’ she asks.

‘Whoa, you must be very hard working.’

She frowns, then says, ‘We have very terrible Nigerians in Australia.’

I almost turn livid, but somehow I manage to keep my cool. I turn around to walk away, then pause.

‘By the way,’ I say, ‘All those sickening tales of ill-treatment of the Aborigines we keep hearing every so often doesn’t speak well of the glorious Australia.’

And I shuffle away, just when the sunflower starts to wither on her cheeks.
Posted by Uche Umez at 02:12 6 comments:

Coffee: a Symbol so American

There’s a tin of Nescafe in the general office; it’s been lying in the cupboard for seven months or more, though opened, still half-full. Nobody drinks it, everybody gulps Milo instead.

I suspect there’s a reason why the tin is avoided like a curse. My colleagues are haunted by a nondescript fear. I long to reach for the Nescafe and brew myself a cup, but I’m still haunted by the ill-omened voice of an aunt who claimed nutrition as her specialty.

My boss likes it, but he is just one among the handfuls of CEOs who appreciate the dark brown beverage. I’ve noticed how coffee is frowned upon at breakfast and management meetings, as if it’s something to be kept at arm’s length. But this is not so in America.

Coffee is native to Africa, quite ironic that it is not cultivated in America, but Africans barely consume one tenth of the quantity of what Americans consume.
The first (last) time my aunt caught me attempting to sip a hot cup of Maxwell House she exploded: ‘Do you want to increase your blood pressure? Want to kill yourself?’ I was 19. Afraid that I’d die, I emptied the drink in the sink. I stopped drinking coffee altogether.

Then in August 2008 I was soothed – in spite of the swirls of various human and non-human smells – by a rich scent that wafted inside Detroit Airport as I searched anxiously for my concourse.

While waiting for the next flight, I shut my eyes and drew in the potent aroma. To say the experience was pleasing was an understatement; it was more than that. It was both peaceful and therapeutic! I felt reinvigorated, after thirteen hours in the air, without a shower.

After I was dropped off at the guest house from the airport, I perceived (for the second time) that same aromatic smell in the doorway. The following morning, still jetlagged, I plodded my way to the basement and my landlord waved at me.

‘There’s coffee in the kitchen,’ he said. I smiled. No, thanks.

I went to Shambaugh House afterwards and smelled coffee – again! I asked the secretary for some water; she pointed towards the kitchen. There, the aroma from the percolator suffused the whole place. I remembered my aunt and wondered, do they want to get heart failure?

Moments later, someone mentioned Java House. On our way downtown, the scent of coffee perfumed the sidewalks. Students strolled past clutching Styrofoam cups imprinted with Starbucks logo (I already espied a Starbucks at the airport) and other logos I just couldn’t make out. Starbucks seemed to be another name for coffee, I soon realised.

Inside Java House, coffee came in various flavours: regular, decaf, espresso, cappuccino, frappucino, macchiato, iced coffee, and latté. I grinned. So many choices, so many ways to die, I thought and ordered a hot chocolate.

It soon occurred to me that drinking coffee was not a fad; it was a ritual.
Tradition. ‘Coffee is in fact America’s numero uno beverage – more swallowed than Budweiser,’ a friend said when I asked why people seemed addicted to it.

I thought of telling him about my all-knowing aunt, but he mentioned that there was no association between coffee drinking and cancer deaths. I stared at him, wondering if he could read minds.

‘In fact, there’re some many health benefits,’ he sounded quite matter-of-factly like a physician. ‘Decreased risk for Parkinson’s disease, gout and diabetes.’

I tried to absorb his statements, but I was befuddled outright. It became clear enough that the average American loves his coffee with such alarming passion – that is even uncommon with the Igbo’s love for fufu, or Yoruba's love for amala. America’s love for coffee could only be likened to the French’s vice for red wine and the Chinese’s respect for tea.

Soon enough, I gave in. A pure, steaming cup of coffee cabana with a bagel greased with veggie cheese. As the raw tonic coursed through my veins, I ignored my aunt’s health warnings, and the other Nigerians who warned me to desist from drinking bitter lemon because it weakens sperm, and to munch bitter kola for it fortifies libido.

As I downed my last coffee, I thought, ‘Coffee is a metaphor for America’s vibrancy. It keeps America firm on her feet, brisk, alert, undaunted by the world’s drudgery,’ and stepped out into the frosty autumnal night.
Posted by Uche Umez at 07:44 2 comments: