One cannot make plain enough the beauty of residencies, especially if you are the type that needs to escape(however brief) the hassle, and at times turbulence, of an open-plan office life, like mine. 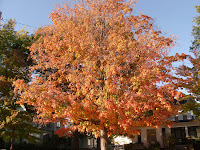 So if you are interested in adding some fizz to your "tricky" writing as well as your thrice-frazzled life, then here's a list of upcoming residencies, thanks to the munificence of Res Artis:

It's been a long time i wrote a poem, and i didn't think i was going to write any soon, until two days ago i was informed about a dear colleague who's just passed away, after a terrible four-month-old struggle with an illness which became fatal, although it'd seemed at first curable, now i don't know if it's right to say this, but i think i was very lucky to have spoken with her on phone barely two or three weeks when i was told she had regained her health and buoyancy, but she had died shortly thereafter, in her early thirties, brilliant, pretty, promising, wickedly witty at times, and quite reserved on the whole.

i hope in reading the poem you would be able to catch a glimpse of who she was, and pray with me that she finds rest wherever she is at the moment.

you were not the type
that flashed teeth
like everyone

left many wondering
what mystery your lips held

it was in your eyes
mostly

like everyone
who flashed teeth
you were not the type

what mystery your lips held
left them wondering

they rarely noticed
the sun at the rim of dawn

you smiled but it was
in your eyes mostly

though the memory is what lingers
now
Posted by Uche Umez at 01:24 No comments: