I know, Allah is Not Obliged by Ahmadou Kourouma, I Do Not Come to You By Chance by Adaobi Tricia Nwaubani, and Burma Boy by Biyi Bandele are pretty smack full of humour, but I have yet to read any novel as laugh-out-loud roller-coaster as Chuma Nwokolo’s Dairies of a Dead African.

I could thump my chest and say it's quite possibly the wittiest novel I’ve ever read by any African writer - except Amos Tutuola's.

The Ghost of Sani Abacha by Chuma Nwokolo, his latest fiction, a collection of 26 short stories, is just as incorrigibly rip-roaring. 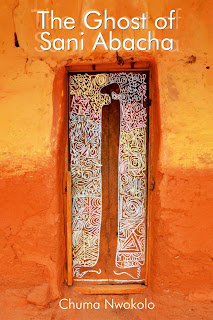 BY THE TIME it was his turn to share his symptoms in the chemist’s private confessional, the shop had run out of laxatives. A messenger on motorbike was dispatched to a Bushemina pharmacy thirty minutes away and the pastor decided to wait.

Five minutes of small-talk passed and the chemist’s fidgeting grew more and more spastic until he gave up on the strictures of propriety and opened his bowl, liberating a stupefying aroma of kitchens into the antiseptic air of the drug store.

Inviting the pastor to join, he resumed his whale meat lunch with a gusto that Dego thought curious, considering the possibility of food poisoning that must surely have crossed the mind of any medical professional seeing the number of casualties seeking medication after the same meal.

When Dego shared his fears, the chemist glanced around confidentially and showed the pastor an empty bottle of laxative.

‘We fat people know the secret,’ he whispered, ‘I will enjoy the meat, but it won’t stay inside! If I don’t bring it up I will bring it down!’ He laughed and pushed the bowl across the small table, ‘Eat, it’s still hot. My messenger will soon bring your own medicine.’

Dego was painfully full, but it was also true that his mouth was still filling up with saliva. The problem was that the chemist had had the brainwave to barbecue the whale with garlicked suya sauce.

The pastor was curious about the taste of whale suya generously garlanded by slices of red peppers and coated with crunchy groundnut paste... plus... was that a hint of utazi in the air? Adding utazi to suya sauce was pure genius!

Yet, his curiosity was throttled by the physical pain twisting like a dagger in his guts, and the rolling waves of nausea that threatened to spray vomitus over the antimalarials on the desk counter. He also took exception to being lumped in a weight category with the obese chemist. ‘Fat’ was not a word he associated with himself. So he shook his head firmly.

The chemist shrugged, burped, and excusing himself, waddled to the loo.

Pastor Dego shut his eyes and began to pray. He massaged his painful stomach, using it as a point of contact with every constipated gut in Waterside. He took captive the Prince of Gluttony, cast him down in the name of Jesus, and bound him in chains of Self Restraint.

He prayed against the lust that entered in through the eye gate – and the greedy conduit of the nose. He shackled Desire to Righteousness. He neutralised the magnetism of piri-piri chicken, suyaed whale and the particularly diabolical combination of moin-moin and soaked gari.

Errant visions were now running amok in his mind and he rebuked the deliciously satanic okporoko fish that swam the red seas of banga soup. He came against the principalities of marine spirits who had sent the snare of the whale to break up his service and ensnare his parish. He prayed against the slavering serpent of the tongue.

He manacled the Pied Piper of Alcohol. He railed against mouths that hungered beyond the needs of sustenance. He cursed guts that distended like elastic bags... guts should be finite and firm, should fill up like steel petrol tanks, and spill over, and say no more! He prayed and... God... he prayed!

Then he opened his eyes and the plate was still there. He sighed. He had really hoped for a miracle. He reached for the suyaed whale, thinking, despairingly, that he was lost.


You can read more about The Ghost of Sani Abacha published by County Book here. You can also get a copy at any leading bookshops in Nigeria and in Ghana. It is also available on Amazon