Eghosa Imaseun has been applauded now and again for how deftly he deploys Pidgin English in his narrative. A. Igoni Barrett, author of Caves of Rotten Teeth, describes Eghosa as “a keen observer of Nigerian urban life.”

Fine Boys is a compelling story which nearly every undergraduate/graduate can readily identify with, a book which incites nostalgia for the “wonder years” of teenage frivolity and high jinks. 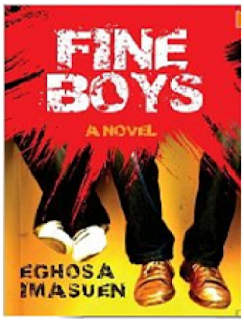 
“YOU KNOW WHAT what your problem is?”

Amide looked at me and smiled indulgently, “Tell me.”

I was escorting her to Osasogie gate on a dusty Saturday morning. Harmattan had come early this year and already the leaves were browning in the dust and dryness. A breeze caught her skirt and she let it twirl around her knees, dangerously close to indecently exposing her. Wilhelm had been away on one of his recent absences last night, absences that I was getting used to and had learnt not to pry into, even though they left a knot of concern in my belly. Amide had spent the night in my room and we were talking about the tests. She scored 59 percent in biochemistry and she had been gloating when I changed the subject.

She laughed. She was still laughing when we stopped a bike. She leaned into me for the kiss, and I teased, “Say it. Just once try it and see if it feels right.”

It was one of the only things that could make Amide uncomfortable. She was like a gruff and quick-witted forties’ film noir girl. Underneath the cool facade, I could see she was fidgeting. It was in the quick drop of her shoulders, and rise again, the way she stared at the spot between my eyes and right shoulder, a barely imperceptible quivering of her upper lip. She finally whispered, “I love you.”

I bypassed the flat on the way back and took a shortcut to Fra and Preppa’s place. The walk took me through the hamlets behind Ugbowo. Children played in front of old-style Bini compounds, with the steeply sloping mud walls and central atrium and the ubiquitous hand painted signs, THIS HOUSE IS NOT FOR SALE. BY ORDER, FAMILY. Pant-wearing, snot-nosed kids danced around on dirt-floored chalk-drawn hopscotch rectangles while their mothers fried akara for sale. I stopped to buy some Akara under a sign, FULCANISA, REPARE YOUR TIRE HIA, and smiled to myself at the vocabulary—I would file it away for a joke, although I soon discarded it when I saw another that said, OGHENOVO THE CORFIN MAKER. AMBRANCE SERVICES ALSO AVALEBLE. I ignored the hand the woman used in serving me. I could have sworn that, as I came around the bend, I had seen her wipe her toddler’s bottom with it. I took the curve into Nova Hotel Road.


“Try this one: four-letter word, acidic.”

“What does it start with?”

Ejiro took his time. We sat on the waist-high fence in front of his new flat. He had taken over Kpobo’s room after the latter left for London. The rest of Ejiro’s new roommates played football on the grass and concrete lawn in front of us. Monkey post. Fra manned the goal and was sweating profusely, shouting and delivering tackles that would make an Italian cringe. The other players waxed and waned across the field, all in a crowd around the ball with no regard for positions or roles. Everyone apart from Fra was an attacker, then a defender, and then a midfielder. Preppa scored, his fourth for the morning, and we, the supporters, cheered. The clapping detail had a total population of two, Ejiro and me. We sat on the fence, occasionally cheered and played crosswords on the back of a newspaper.

“Oboy! You dey try o. And you say you don’t play crosswords?”

I nodded and murmured to myself that I did not. I lacked the attention span and always felt the puzzle designers were idiots. I did not tell Ejiro what I thought of those who had the time to solve the puzzles. I looked away from the paper and stared at the football game. I stopped seeing it and let my mind travel. It was November already. Just like in my case, the twins would not be entering school the year they were supposed to. The last time we spoke my brother had told me he wanted to leave Warri.

He had taken over my job as purchasing clerk; the stress and the driving and Dad’s screaming were not the only reasons for wanting to escape. Eniye worked in the bank as an office clerk. She too had learnt how to drive and spent afternoons supervising Mom’s supermarket; the deal had been reached where she would work in both companies. They were both bored senseless. I wanted them to leave Warri too; Osaze would enter Uniben for engineering while Eniye had applied to study computer science at the University of Lagos.

Mom and Dad’s truce had lasted only a month after Nene’s burial. The cold war quickly turned hot and most evenings at home began with us looking at an exasperated Dad pacing around the sitting room and a screeching Mom accusing him of every sin under the sun.

“What kind of nonsense talk is that, Omasan?”

“Don’t touch me! Why can’t I go to law school? Yes! If it is to go around town with your nonsense girlfriends . . . Even when my mother died, where were you? You abandoned me.”

“Darling, watch what you say o. You can’t take it back.”

“Yes! I was alone. I was alone. I’m still alone. What I want from you is support. Have I not tried? I gave you children. When I was supposed to be doing my master’s, my doctorate, I was here in Warri cleaning up after you. Now you have money and you want to enjoy it with your rubbish small girls. I want to go to law school. To have something for myself, and you are telling me of family time. Family time, my foot. What of my time?”

We watched and kept quiet. The only time I intervened was when, after a thorough verbal lashing from Mom, Dad chased her around the house determined to beat his point of view into her. He caught up with her in the kiddies’ parlour and was bent over her crouched form in a corner when I entered the room and said, “Don’t touch my mother.”

Dad’s shoulders deflated and he turned away from her. He refused to meet my eyes as he shoved past and then shuffled with slumped shoulders to his bedroom. I did not go to Mom. Instead, I waited and looked at her. She got up, dusted herself and said to the twins and me, “I’m sorry.”

She won the battle. She would begin law school in January. But the fights continued. After each, whether ending with blows or not, Mom would kneel in her room, from where we could hear her praying loudly for forgiveness. She typically stayed in there for hours, appeared to prepare food, eyes swollen and bloodshot, and quickly retreated into the room. Family dinners stopped and both of my parents took to eating in their rooms. Dad still called me into his to complain. I began to listen. I tried not to, and my heart broke, when Dad’s words made me ask my own questions. Why was Mom so angry? Why did she complain about having all her options taken away from her because of marriage and children? Were we a mistake? Would she have made professor if she had not had us?

I was so happy when the General reopened the universities in late September. I noticed the envy on Osaze's face, in his voice, when he escorted me on the drive back to school.

“This one, nko: twenty-one across, four-letter word, inter?”

Fine Boys by Eghosa Imasuen is published by Farafina Books; it is Eghosa's second novel, his first being the remarkable To St Patrick, an alternative history fiction. Fine Boys is available in bookshops in Nigeria and Ghana. You can order from Amazon, hard copy and Kindle Edition here