OK, call it whatever you want...say, Literary Africana!

But anyhow, I’ll be featuring (with the kind permission of the authors – oh, I know, well, you sometimes can’t escape the easy magnet of clichés) between now and who-knows-when the excerpts of some fiction by a few authors – mostly Africans, of course – whose writing I strongly admire.

By this, I’m hoping some of us aspiring writers can draw inspiration and some courage from them, as we strive to find a foothold in the steep uphill climb that is creative writing. Lest I forget, I was privileged to see a few of these works in their raw artless foetal form, before, you know, the works finally came out polished as gem, and hit the bookstands.

We shall start off with a brief excerpt of
Shadows by Nuvoyo Rose Tshuma:

Shadows has been esteemed by the award-winning novelist Chika Unigwe, author of On Black Sisters' Street, as "a staggering work of beauty. Tshuma brings a lightness of touch to tragedy and the reality of life for ‘small people’ in contemporary Zimbabwe.’

Nuvoyo's writing is so crisp, so understated in its narration, you're stunned by its sharpness. Enjoy! 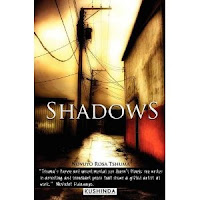 
WE ARE IN THE SUBURBS, at the Nleyas, where Mama works as their domestic. I have fallen in love for the first time, with the Nleyas’ daughter Asanda; she is the prettiest thing I have ever seen. Creamy skin and long hair which her Mama straightens with a hot comb, and huge round eyes she likes to bat like Darla in ‘Little Rascals’. I watch her for days and I cannot speak.

‘I’m not supposed to speak to the staff,’ she says in her white accent.

‘Well,’ say I. ‘I ain’t the staff.’ I am trying to affect an American accent and it’s going terribly.

‘Your mother is, so that makes you the staff’s child. So I’m not supposed to speak to you.’

It is the first time I feel anything like shame for who I am, who Mama is, who she makes me.

Asanda throws back her pretty head and laughs. I watch her hair and zoom her down to slow motion, imagine she is an African American actress in one of those films I have seen on tv, Diana Ross in Mahogany, shaking her hot-combed hair in tender seduction. But her laughter is sharp, says ugly things before she speaks them. ‘You’re a liar. My mother told me she’s your mother. You’re a liar, just like your mother.’

‘Don’t you call my mother a liar.’

‘Yes she is, my Mama said she is, she says she stole the cooking oil, and you can’t do anything to me for saying it.’

Tears well up in my eyes. I have been trying to impress this girl and now she is making a fool of me.

She throws back her little head and laughs that mocking laugh of hers. ‘I could never like you. You’re staff and you’re too black.’

I have never taken the time to really look at myself. But it is true; next to Asanda’s creamy skin, I am like a little block of coal. My front teeth overlap. My nose is tiny and my lips fat. But it is better than her big flat nose, I decide. She may act white, and look almost white, but that nose is undeniably black. It is the first time I come close to anything like self-loathing.

My crush on Asanda quickly turns to spite. She is pretty, she is rich, she is spoilt and, worst of all, she humiliates Mama every chance she gets.

‘What is biology?’ Asanda asks Mama one day.

‘Well, Asa, let’s see, biology is the study of your body. The good thing that your body likes, and the things which is bad for you. And eating gum that has been in the floor is bad for the body.’

‘So if I don’t wanna go to school I can eat this gum I got off the floor?’

‘Oh no, Asanda, that bad bad! If you do that mother will take you to doctor, then he will know that you naughty –’ Mama’s eyes grow large – ‘and he will give you very big and very pain injection like this, see? Ouch! Very pain!’

‘You’re lying,’ Asanda says, thrusting her bottom lip forward. ‘You’re just a maid and you dunno anything. That’s why you speak broken English. And you stink.’

‘Asanda, that bad bad! Me going tell mother that you rude to people bigger than you.’

‘Go ahead, tell her, I heard her saying it, she was discussing maids with Mrs.
Hoffman. Mrs. Hoffman caught her maid spitting into the stew pot. My mother said you’re generally good but you tend to eat like they don’t feed you where you come from and you stink.’

I take a step forward. ‘Don’t you speak to my mama like that!’ I screech.

Asanda puts her hands on her hips. ‘You’re staff. You can’t touch me.’

I wish I could strangle the brat. I despise Mama for not being able to speak up. At that moment, I learn just how close humility is to humiliation.

Shadows is available to order on Amazon, Foyles, and Word-Power. Keep checking the site for availability in bookshops and other stores, links to reviews, etc. Follow Shadows on the facebook page Shadows – Novuyo Rosa Tshuma to keep abreast of all the latest news about the work.