A Rambling Thought on Some Funerals I'd Attended

I sat in the fifth row of the pew of an Anglican church. In front of me was a man who looked squat in a cranky way, with a face I didn’t really like, but he was nicely-dressed in a crispy paper lace. On his oblong head a black cap with sequinned twigs sat awry, as if he’d thought of taking it off during the monotonous service, but decided to let it sit there awhile.

Sincerely speaking, his face reminded me of a rumpled hand-bill – advertising an explosive crusade against witches and wizards – I had ducked into a bin as I made my way to the interment service.

The oblong head had been murmuring in low tones without a break; murmuring because the air was too hot, or probably because his nostrils were finding it hard to breathe through the dank mix of odours drifting around. Although the ceiling fans were whirring so hard to keep us from toasting in the humid February morning, I felt sweaty and kept dabbing my brow with a hanky.

The church was one terrific dam, overflowing with mankind, with rainbows of attires! But I didn’t think I would like to be seen walking this part of the country at sundown for the church not only looked antiquated but also sequestered in a forested, pothole-riddled village that evoked the terrors of Otokoto days. Those were dreadful days young men craved instant wealth and people were highly conscious of their private parts.

People came from everywhere to attend the interment service. Cars and buses crouched on either side of the road; the churchyard was indeed crammed full. Senator Igirigi’s passing was well-publicised. He was a founding member of Africa’s most popular party. He once declared: ‘So much money in this country, so nobody should complain because a legislator is receiving N35 million as quarterly allocations. We’re thinking for the people, the entire nation. We can’t afford to think on lean stomach. Besides, this is Nigeria; we are not starving like Sudan or Somalia!’

The press had lambasted him outright, accusing him of stimulating and celebrating the looting of our treasury, growing a cabalistic millionaires’ club in our national assembly while millions of woebegone Nigerians were already groaning from hunger. Amid the hubbub, he’d suffered a fatal heart attack.

So here we were in a church he affluently refurbished. We came to pay our last respects to a man whose fleet of automobiles comprised: Toyota, Honda, Benz, Jaguar, Chrysler, Lexus, Hummer and Lincoln Navigator. His chains of houses across the country remain unrivalled. And his name still echoes in the vaults of numerous banks.

I glanced over my shoulder, almost thinking of telling him to shut up when he showed me a gap-toothed grin.

‘Dis father go dey here dey preach till all the food go cold and nobody go chop am sef!’ he added. 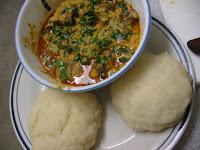 Although his face put me off, I laughed quietly, because someone had once uttered something similar when I attended a burial two months ago in Mbano. In fact, some young men had harassed a girl, who strutted past with a tray of eba and onugbu soup, apparently ignoring their own canopy. Just last week Friday, at another burial, an elderly woman had lumbered out from a canopy. With her wizened face turning strangely raw, she threatened to slap a lady for first serving another canopy before theirs. ‘Don’t you know we are in-laws who came all the way from Afikpo?’ the hag had barked.

Right there, I quickly remembered another burial I had attended with a friend. His friend had died in Boston and was flown back to his hometown in Obowo. Nearly the whole community thronged out to mourn the Harvard-trained medical doctor. He was just twenty-eight. His people had apportioned some plots of land on which he was to build a hospital. And he’d died.

I felt stabbed with grief in the heart, just like every other person who heard about the demise of the young man. I didn’t know the young achiever, but his untimely death reminded me of another’s friend’s cousin, who passed away in Germany after years of training as a nuclear scientist. He too was brilliant, promising, less than thirty years old. In both burials, most people gnashed their teeth, and wailed, as if they would never be consoled. So I thought.

After the committal however, food appeared – although people looked distant as though they had decided to go on fasting to prove how miserable they really were. But there was a sudden scramble shortly after, for it seemed the refreshment might not go round, someone had whispered. The man seated next to me was glaring at the malt drink in his hand. I was shocked to hear him say, ‘Which kain drink be dis? Dem no fit serve Malta Guinness, dis one dey run belly.’

That was not the end, someone else grumbled about the size of the beef. When the food came to my row, I was still feeling downcast and disoriented. I didn’t want to believe that death could snatch a man so young, so full of promises. Ginika, my friend, noticed my hesitation. He elbowed me, pointing to the tray. My hand hovered over it still, before I finally picked up a plate of jollof rice with sizable beef.

‘What is wrong with you?’ Ginika asked, looking puzzled.

‘I don’t see any reason why his parents should even serve us food and drinks. The guy was barely –’ I started to say, but he cut me off.

I stared, speechless, at Ginika. Then I stared at the people who were busy wolfing down food into their mouths and, conscious of an ashy taste in my own mouth, I dropped my plate on the ground and slowly shook my head.
Posted by Uche Umez at 08:56