Emotions Stirred After A Day At An American University

Of late, I've been given to reminiscences, maybe because i am growing old, or getting more fantastical, or just being appreciative of opportunities; so i feel like sharing this recollection...


“Nothing in the world is more dangerous than sincere ignorance and conscientious stupidity.” – Martin Luther King Jr.


Cold morning, the air feels like damp wool in my nostrils. I am afraid I’ve caught the flu, although my nose is not running and I haven’t begun coughing. I squeezed the sides of my ribs, feeling for a kind of lump or pain. Hypochondriac. I feel nothing, normal.

My mind whips up a scene from Eliot’s Journey of the Magi, the Iowans say it may get bitingly cold in the coming weeks, but I may not be around to see my first snow; much as I would have liked to see snowflakes drifting down from the sky, like the breath of God; I can’t, because this is as much chill I can put up with.

I think of camels and turbaned men, and then picture myself sitting on the sofa with my gracious wife; my lovely daughter lying serenely across my lap. I’m beginning to think, just for a change perhaps, we may spend Christmas at the picturesque Obudu Cattle Ranch, among the undulating plains and solid mountains and swirling mist, when the savory aroma of coffee wafting over the sidewalks shifts my mind back to reality.

It is Thursday, August 28, 2008, I steep into the library. No, I step into the University of Iowa Library, fondly called the U of I Libraries, and two feelings drench me almost at the same time. The first feeling is warm; it makes my jaw drop in amazement. The next feeling blows coldly over me: it churns my stomach in sadness.

For a moment, while my fellow writers walk gaily through the glass-door entrance, I stay behind, surveying the towering height and expansive girth of the granite-and-steel fortress sitting imperiously on 137,500 square feet of earth.

I’ve heard the clichéd joke about everything being big in the United States: roads, cars, appliances, clothing, burgers and even candles (made in America) are bigger than what you would ordinarily find in other countries. Take my beloved Nigeria for instance; I have come to notice that a candle keeps getting thinner every day you went out to buy one, as the power situation worsens continuously. In the good old days, if ever we experienced one, candles were fat like the end of a baseball bat. As a child I liked the feel it had in my hand. You could light a candle and it took days before it melted away. Of course, blackout was a rarity then.

Everything looks big in America, I have been forewarned.

Yet the sight of this 153-year-old magnificent architectural pearl does not reduce the goose bumps crawling over my arms and neck. I shake my head. I hurry after the group as the two bibliographers welcome the international writers and then lead us round the cool ambience of abundant books and resources.

We come to a section that serves as a hold for Government Documents and Special Collections.

Something else has caught my eye.

I turn, retrace my steps a pace or two.

I look at the books. Then I reach out a hand and lift a hardback volume leaning ponderously on a shelf, and it is not the leafy scent of paper I smell. No, it is the resolve dripping from the pores of great men and women hunched over the table; ancestors who slain ignorance on the altar of pages that I smell. It is the odor of the ageless spirits that built a flourishing civilization that tickles my nostrils.

As I flip through the delicate pages, I sense a presence not unlike the supernatural. Centuries-old. I think I hear something whispering off the pages.

I try to catch the ancient whisper pulsing through the vein of words, by peering hard at the mellow page, but it eludes me as Tarek, the multitalented Sudanese-born-in Egypt-Austrian writer, calls out my name and disrupts my trance.

Again, I dash after the group as they climb the stairs to the fourth floor which preserves a rich diversity of literature.

It is revealing to note that libraries have transcended their traditional roles: they are now multifaceted and innovative. I am speechless a moment as the realization sinks in. Modern libraries are no longer limited to serving reading and reference/research purposes. Interestingly, they did not abandon their traditional services in this rapid e-Age; they only modified technologically. Thus, the typical American university library is fully electronic-based. E-journals, e-books. E-library?


This is not the case in Nigeria. We have a heartbreaking story; our libraries are in stark disrepair. Like abandoned shrines. Like razed homestead.


Downstairs, on the last floor, we look into the neat, largely-computerized sections. I see gigantic white tubes hanging from the ceilings, and one of the bibliographers tells me the tubes suck air out of the building, so the books do not get damp, because of the summer floods that swept through some significant areas of Iowa City; the tubes act as humidifiers or whatever. 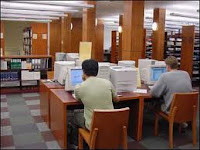 Really, I did not catch his explanation because he spoke in rapid drawl, almost like he rapped, but I nod, not wishing to appear muddled.

We are told the section is the Digital Library. Contains more than 100,000 digital objects — photographs, maps, sound recordings and documents — from libraries and archives of the University of Iowa and its partnering institutions. It also includes faculty research collections and bibliographic tools (holdings information for some library materials that are not otherwise accessible through the online catalog). Digital collections are coordinated by Digital Library Services, which manages the preservation, delivery, and structure of UI Libraries' digital content.

Library digitalization, I mouth out. Metadata. Digitizing research and instructional materials. I close my eyes but I cannot convert images, text, audio and video into digital content. What I see are the cracks, cobwebs, molds and dust-balls on the ceilings of a poor library in my rich state. One late afternoon, I had gone there to hide among books, but the week before, a building had collapsed in Lagos, crushing twenty people or more, and I’d slunk away, for fear that a similar thing may happen and I would groan beneath a pile of rubble. Dead among books.

The group moves on, led by the female bibliographer. I can’t recall her name, but it sounds like a word out of Shelley’s Arethusa. The male bibliographer, a hulking figure in saffron shirt and cream chinos, has been called off. The tiled floor glistens in front of me that I long to bend down and run my fingers over a square of marble stone.

She points out how to use the InfoHawk Catalog and Database features on a computer, and I grin. I wonder at once what Professor Steve Okecha, the erudite scholar and poet, would say just browsing the shelves. He schooled in prestigious universities, so this may come as no surprise.

Then I remember his recently published book. Provoking as well as insightful. The title: The Nigerian University: An Ivory Tower With Neither Ivory nor Tower. The author happens to be my friend. Reading the book made my heart twists itself.

It is distressing to note that poor countries like Niger, Burkina Faso, Lesotho, Liberia and The Gambia spend much more on education than Nigeria. Most of the African countries are striving hard to allocate the 26 percent of their annual budget on education, as recommended by UNESCO.

Giants are not swayed by semantic; Nigeria is a head-strong giant.

She will not spend more than seven per cent on education, it seems. Professor Okecha makes every true son of the land to express chagrin at the insensitivity of the federal government and its refusal to heed to home-grown advice of increasing the annual budgetary allocation, if our education system is to be revamped.

But we are a nation obsessed with erecting a massive defense industry, amassing munitions, missiles, rockets, bombs and fighter-planes, when we are not even at war. Some would argue that the militants in the Niger Delta are spoiling for war, let’s exterminate the locusts.

I remember the racket that ensued when a Nigerian envoy was caught with 2.27 million dollars in cash at the international airport in New Delhi, by Indian authorities. I remember the past president spending millions of dollars to acquire more military hardware. I remember dear Britain offering to upgrade our defense structure (how magnanimous. I would rather have wished they had offered to upgrade my alma mater and a couple of others), and I remember this and more, disheartened that nobody could think of building an enduring defense against corruption.