A Buzz in the Ear

You lose your space almost always as a tourist. Sometimes, it’s your cool. Tourism remains the craze in many countries. It comes with a drawback, though. A nuisance, of sorts; a confrontation not every tourist can quite manage. Take India, for instance. She is a florid bazaar of a country, a slideshow stacked with a magnificent mix of tradition and modernity.


Known for her matchless embroidery of sights, sounds, and smells, India can tax your patience. And sociability. Like a fussy host – particularly when you are damned tired. Or you wish to be by yourself.


A walk in some touristy hotspots can turn intrusive, vexing for the angrej– foreigners. You magnet attention everywhere you step into. Dollars flash off your eyes. The crease on your forehead seemingly broadcasts your needs.


In no time, both young and old besiege you from all directions, fussing about, apparently feeling you, like a striptease; at the same time, leaving you amazed at the acquisitiveness of man.


Almost everybody becomes a wallah peddling stuff, offering services, chucking all kind of frivolous information in your face as though you were a trash can – all of this underlined by over-cordiality.


- You want rickshaw? Change money? Some chai? Lassi?
- Emporium is over there, handmade craft the other way. Which you want?
- I take you to good chicken biryani joint, yes?
- Or, you want something to smoke?!


That was the question someone shoved in our face, a few days ago, when Xavier and I went to get some best-selling Indian-authored books at New Book Depot in Connaught Place. I had told him about Half of a Yellow Sun by Chimamanda Ngozi Adichie. He was eager to learn about Nigeria, so I said, ‘Xavier, you must read this book to know the sad misadventures that’s my country.’


Just as we paid for the books, sauntered out in the haze spreading over the undulating skyline, a cleft-chinned man materialized at our side.


Xavier had lived in India some years before. So he knew the roadside gimmicks, and kept his face as flat as chappati. Brimming with élan, I tried to carry on nicely. But soon grew peeved by the man’s bullish tenacity. 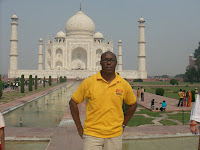 I remembered briefly how our wonderful trip in Rajasthan had almost turned nightmarish. I remembered Agra. Jaipur. Mathura. I was accosted by nearly every able-bodied man, asking if I wanted ceramic, curio, cigarette. Gemstones – 92.5% silver. Sari for the missus; dhoti for the memsahib; Kashmir sweater. Original handmade pottery. One certain young man sweetly plied me no end, ‘I give you good price. Remove 100 rupees. OK, take it for 50 rupees. 20 rupees? 10 rupees?’ Not to mention another fellow who tried to corner me at the Taj Mahal to have my photographs taken for 200 rupees.


In all those places my brownness screamed aloud my foreignness, not only was I being bombarded with merchandise, but also quizzed by a hundred and one people.


I started feeding their curiosity albeit generously, until it struck me that I would wind up in a clammy maze of Q & A, not in any way rewarding like Who Wants to be a Millionaire? It actually dawned on me that foreignness can be sniffed out like jasmine scent. I became subjected to bouts of doubts. Is all of it real? Or is it just me? Or perhaps, it is my rupees they desired?


Whereupon, I realized I would probably grow daunted, chagrined, anytime I stop at the usual-bustling Delhi bus stop, because someone might query me, telepathically even.


Because being an outsider, a tourist, can get somewhat tedious, frustrating, even maddening, like the buzz of a mosquito in the ear. Notwithstanding, it does get better – for when you lie in bed later at night and relive the day’s motley scenes, amid a backdrop of balmy music, you see that tourism, no matter how much it corrodes culture, is simply targeted at making the visitor feel welcome.


For me all the pestering rarely demystifies the lure of distant sunsets. I would come back to India, again. And again, because so much beauty blossoms in this vast sequined land of temples, tombs, flowers and spices. Because Ma India exacts no promises, never expects much from you.
Posted by Uche Umez at 09:00