I’m always tempted to add people watching to one of my hobbies whenever I have a form to fill out. But the form might find its way into the hands of someone curious enough to call me and enquire what people watching is all about.

I don’t want to be mistaken for a spy, a voyeur, or even worse, a freak, which sometimes I think I am – people watching is a freakish thing to do, especially as it reminds me of juvenile days when boys peep through the keyhole to see which girl was soaping her body.

I often add travelling instead in my list of hobby. Travelling offers me one good opportunity of watching people, but since the roads are particularly treacherous and the passengers are anything but pleased with the bumpy trip, I often nod off or bury myself in a novel. 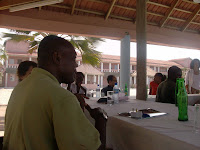 Watching people while travelling does not offer three-dimensional view or enough space for covert observation, for someone is always sitting next to you. So you’re bound to get caught.

A friend of mine chatters about bird watching as if he’s just discovered orgasm. I suppose he’s been smitten by National Geographic. No doubt, looking at birds performing open acrobatics in the air offers some delight to an aviary-minded person, but where in Nigeria can you go for bird watching?

Sunset watching, a poet says he draws inspiration from staring at the horizon as the sky refracts and reflects off the multihued moods of a spent sun. He dreams of Eden, and I am tempted to tell him to live as long as Methuselah so he could witness the new Heaven.

I avoid beer bars when I feel like watching people. I only have an hour break from the office so bars are primarily empty of people in the afternoon, though loud and crammed with drinkers at nights. I may never do restaurants simply because most of the eaters there are too hungry to provide novelty, and the way they prod their teeth with toothpicks make me think of a brute.

Imagine sitting in an unobtrusive corner of Mr. Biggs staring covertly as people carry plastic trays to their tables, as if bearing the Holy Grail. 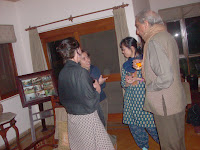 In restaurants, people simply come, eat, go – most times they leave dissatisfied because the price and food are not really worth it. They don’t carry on, or ‘belong’ or ‘represent’, as most of the young boys and girls do whenever they swagger or strut into the fast food eatery. Yet I don’t concern myself with teenagers except when they are in the company of grown-ups, a middle-aged man and a female student, for instance.

In eat-ins, the class of people is varied. Moreover, people tend towards affectation, assume various personalities and live out uncommon lives, like men being chivalrous and women acting decorous. Consider the young man who tries to over-impress his girlfriend by ordering the large size Tampico juice for her instead of the small size, and the girl trying to object only that she isn’t persuasive enough.

However, every person sitting there offers more than just a glimpse of their lives no matter how couched in artifice or manners, and to the expert eye, you can summarize the person’s true personality and attitude to life. There are always tell-tale signs that people exhibit, sub-consciously, when they are sitting by themselves or in the company of others.

People watching is more just than a fun thing; it’s enlightening. It reveals certain aspects of human frailty. Most times when I watch a woman trying to hold back the tears or a man muttering to himself, a chill spreads in my stomach. I have come to realise that we all have secret fears and doubts, the extent of man’s need for community. In fact, when I watch people I see a part of my life (past or present) and it thus makes it easier for me to appreciate the person I am and hope to become.

Still my fear is this: I don’t know what my response would be when someone approaches me some day and snarls and jabs the question right in my face: “Why are you staring at me?” I can’t say if I would stutter or just ignore him.


For now I will rather keep watching people than obsessing about a bunch of pathetic fakes trying to pass off as original in a bid to covet an atrocious prize in Big Brother Africa.
Posted by Uche Umez at 03:14