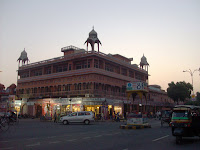 We grip our mugs of coffee tight as we shuffle into the dining room. Then, we sit so close we can actually hear each other’s jagged breathing. The lights are on, the air warm and familiar. But if you stand outside on the veranda you’d wince at the five o’clock breeze nibbling frostily at your skin.

‘I don’t know if it is me,’ Sabina mutters, ‘but this doesn’t taste anything like coffee.’ She’s American. I can still recall the sweet brain-soothing aroma of coffee I had swilled many a cold morning in Iowa City.

As Angelberto lifts his arms to gesticulate I think he looks like someone who just has to unburden himself of whatever might have been upsetting his bowels. ‘Indians are known to produce excellent chai.’ His voice sounds raspy. ‘But I don’t know why they bother to tell the world that they can also make coffee.’ He’s Mexican; sometimes his knowledge of cultures is just as remarkable as his wit.

I know he has been looking for a way to voice those thoughts, because every other morning he always stares at the coffee in his mug before taking his first sip. I presume it has something to do with the milk. Now I realise it is the coffee he doesn’t like. The coffee that’s served to us at dawn doesn’t have the usual trademark aroma – that inviting scent which makes you want to shut your eyes and suck it all through your nostrils. The coffee, really, is anything but black or caramel-brown. Even when mixed with cream, it still doesn’t tempt you.

‘So cold,’ I breathe out, my teeth rattling.

‘Look at you – it’s not yet winter!’ Lihn says, giggling. She’s Vietnamese. When she’s not giggling, she is sprinkling Karma and Chakras in her speeches, as though she might have been an Indian cook lavishing her thali with chatni and pickles. Lihn always uses metaphor and simile to spice up her narration.

Sabina mentions the monsoon. How she felt like a bedraggled parakeet on her first day in New Delhi when a squally downpour had announced her arrival in August.

‘Did anybody check the weather page in the dailies?’ Valdis asks. She’s Icelandic, taciturn by nature, or perhaps by circumstance – her English is a bit halting, like my native dialect. But she has a snug, motherly look such that you’d feel an urge to nestle in her arms.

‘I hope it doesn’t get colder than this when we get to Jaipur,’ I murmur, blowing on my coffee so the steam will scald my face.

We all turn to see a woman stumbling into the room with a whoosh. She is swaddled in a striking burgundy salwar kameez with a matching dupatta – a scarf, or shawl – draped round her neck and over her shoulders. The salwar is a drawstring pajama-like pants while the kameez is a tunic-like shirt. They are just as commonly worn as saris by Indian women, and come in various luscious designs.

‘Hallo, everybody!’ she cries, puffing and rubbing her palms together. ‘Cold, is it?’

Wondering why Maliha is dressed so light, why every Indian traditional outfit looks modish, and why I always regard the average female Delhite as always being over-dressed, I gulp down my coffee fast. But its aftertaste sits on my tongue, a lukewarm film. An omen. I start to contemplate whether to add more caffeine to my blood, not only to warm up my insides completely, but also to erase the bland taste in my mouth.

‘This is beautiful,’ Valdis says brightly, feeling the dupatta on Maliha’s shoulder as if it were gold.

‘Thank you. It’s hand-woven, from Kashmir. We could get something like this in Jaipur.’

‘We should all go to Kashmir,’ Balogh apes an indistinct voice, rolling his eyes around in a comic way. He’s Hungarian. And always, he speaks so proudly of his country’s history and the government’s great support for arts that I often feel envious and riled, especially when I think he has noticed that I seldom eulogize my country. The few times I spoke of Nigeria, it was to pillory the cabal of crooks plundering oil riches and dreams. Notwithstanding, I like to think the Hungarian artist would make a better Santa Claus, what with his jolly, white-bearded face, except that he is not plump.

I realise I need something more than three cups of coffee for the trip. Something furry and thick like the dupatta – much more comforting. I am about to run down to my studio to pick up my hooded jacket when Mehali asks, ‘You are all ready to go to Jaipur?’

I try not to frown as I stuff my shaky hands into my pockets, steeling myself against the blustery chill ahead.

‘Good.’ Maliha flashes me a smile. ‘We start first with Rajasthan!’

And I smile back, dreaming of sunshine and splendour.
Posted by Uche Umez at 07:32