Ukamaka Olisakwe Evelyn has been praised now and again for her debut novel, Eye of a Goddess. Okey Ndibe, author of Arrows of Rain describes her as 'a tender alluring storyteller worthy of a large, devoted readership. Her novel [Eye of a Goddess] seizes one's attention from the start - and never lets go.' 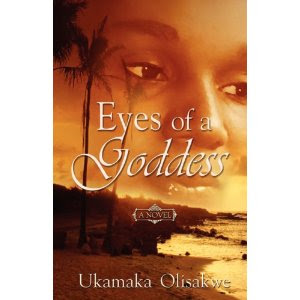 IT WAS THE EYES.

I’d always thought it was the distinguishing feature—a growth at the side of my little finger—a sixth finger on each hand that made me different, which took the laughter away. But it had to be more than that, because there was the strangeness that clung to me like a second skin, leaving me hovering between dream and reality. I walked dazedly. Life, a blurred line I could not make sense of anymore.

Then, eyes. Something had escaped from them, something that was supposed not to, that had longed for freedom. It left me gasping, making me realise that there was more about my nature that caused things to go wrong, leaving me in an invisible place where outcasts dwelled, a place of no laughter. It was a time of sadness when I took the tray of food to Mama’s room. It was a time of sadness.

Inside, Mama lay on the bed. Her whimpers filled the room. She cradled the framed picture of Adaeze to her breasts. It was the fourth day in a row she’d lain in that bed, crying; rending tears that came from the pit of her being. Earlier, Azuka, Mama’s sister, had prepared a delicious dinner of orah soup and fufu. Mama’s favourite. There were chunks of smoked fish, the sort brought from Maiduguri, and many medium-sized pieces of beef in the soup. But it was the wrong time to serve such a delicacy.

Nkemjika didn’t touch his plate; he just stared as if expecting something to emerge from it. Ebuka frowned at his. I tried to chew a piece of fish, but it tasted like unwashed onugbu leaf and I spat it out. Then I stared at my plate, as the soup congealed and flies hovered while I swatted them. I was still staring as night came and Azuka called me to take food to Mama.

When I walked into Mama’s room, she lay on the bed, her back to me. The framed picture of Adaeze peeked from the crook of her elbow, and her shoulders shook. I drew up a table for her and placed the plate of fufu and soup, before leaving, soundlessly.

As I came back with a basin of water for hand washing, Mama had stood, looming, in the middle of the room; a strangeness about her. I couldn’t see her face clearly because she was obscured from the light sifting in from the open window. One hand was balanced on her thick waist and the other tightened the old flowered-patterned wrapper wound round her chest. I knew things were about to get bad. And there was nothing I could do about it. Suddenly, the fluorescent light came on and the room took on an eerie white quality.

“Did you put witchcraft in the food?” She demanded, arms akimbo, towering as if she had added extra feet. Her hair was a ruffled bob of savage cotton wool, and her eyes were sucked deep into her skull, seeming like a hollow cave on her unhealthy complexion. My tongue was glued to the roof of my mouth. A cockroach ran across the curtain frame behind her, and a wall gecko slithered from behind it. I wished to turn into a fly, wing into the air and disappear before she pounced, before she squashed me.

“Asim, did you put nsi in my food, the same you used to kill my baby?” She advanced as I took a step backwards; the floor creaking beneath her weight. The bowl of water shook in my hands, spattering drops of water on my leg, and unto the floor.

“I didn’t put anything,” I spluttered.

My leg felt cast in lead. My stomach growled, and I felt the tightness of hot urine threatening to gush out unbidden. I had made it backwards, almost out of the room, when she pounced.

“Ewoo!” The shrill scream left my throat as her heavy fist smashed into my face. I swayed, fell. The pain spread in swift waves, cycling, swallowing.

I tried to run, but her hands were like a vice clipping me to her.

“I will kill you!” She screamed bashing into my skull.

She punched my face, nose, neck, everywhere. I felt her hands on my eyes, as if to squash them, but it was hot peppery syrup that filled my eyes instead. I was on fire; may be in hell.

I struggled. I flailed. I wondered where everyone was. Where was Azuka? Where was Nkemjika? Where was Ebuka? I felt my hair ripped out of my scalp. My nose tickled. Where was everyone?

“Bianu. Help!” I heard a voice that must have been Azuka’s enter the room. They struggled. I struggled. I was dragged here and there. They were shearing me in halves. My ribs hurt and hell was there, engulfing me. I was ripped apart alive as different voices filled the room. I was finally dragged to the floor by someone; the pull very painful. But I didn’t care, I was only afraid of the white light in my head and the hellish pain in my eyes. I heard a rip. My brain kept shaking. A hammer continued on my head, my stomach, and my shoulder.

“Biko, Leave her!” Nkemjika’s voice sifted through. Then, Nkemjika’s hands dragged me outside. I knew it was his.

I was still screaming. “My eyes! I am blind!” I couldn’t open my eyes.

“Njideka, sorry,” Nkemjika said as he covered me with a wrapper.

I was naked. I cuddled the cold ground, like a foetus. I wished the cold would chase away the hell I felt inside.

I hugged myself. I held my face. I didn’t know where to begin. To rub my eyes? Or to run mad? I felt more hands patting me, heard sympathetic whimpers. Ebuka sounded as if he had water in his nose. Nkemjika’s whimpers broke into his words; stressed syllables. Mama’s voice kept ringing out, drowning theirs. She cried that the pastor had confirmed I was a witch.

“I will poison her if she stays here one more night. I will strangle her to death! I swear,” she barked. “Egbue mia! I will kill her!” She swore. “Forgive me, Lord,” she cried loudly. “But she won’t stay here again. Eziokwu m!”

I remained on the ground even as Nkemjika’s hand tugged me to stand up. I didn’t. I couldn’t. Warm tears trickled down my face, into my mouth. He stayed with me for some minutes, crying. Then I felt him walk back into our house, where voices were clashing. Azuka was fighting with Mama. I wished for Papa. I wished for Adaeze. I wished for death. But none of these came.

It was not so many weeks ago when Papa was with us, when Adaeze was still with us. It was all not as Nnem-ochie had said it would be. She had lied. I knew that I was going blind, that I would never see the light again; I would never see the world again. When I couldn’t hear a voice close by, when all footsteps seemed to have gone into the house, I stood up, tottered on my feet, and slumped again. I was determined to escape. I crawled my way out of the compound. I felt my feet around the sandy ground, testing my blind vision in the familiar terrain.

I held unto the lattice fence of ogiris trees and made my way blindly out of the compound, out into the neighbourhood and prayed no one saw me. I willed the tears that scalded my eyes not to run. When the pain didn’t stop, I collapsed to the ground. I lay there, a secluded spot I knew well, a place where I had played hide and seek with Adaeze. I stayed there, for minutes, hours, until the sounds of night life was left in the world. I lay there, remembering how it all started, how easily one’s life could change. My memories flooded with the same sharpness of the cries of the crickets around me.

Eye of a Goddess is published by Piraeus Books, US, and available in some Nigerian bookshops and on Amazon
Posted by Uche Umez at 14:05